A military court in the Democratic Republic of the Congo (D.R. Congo) sentenced 51 people to death on Saturday for their involvement in the killings of two U.N. staff members in March 2017, Agence France-Presse (AFP) reported, noting the trial’s prosecutors suggested local militiamen carried out the murders “to take revenge against the UN” for allegedly “failing to prevent attacks against them by the [D.R. Congo] army.”

Prosecutors of the court in Kananga, the capital of D.R. Congo’s Kasai-Central province, “had demanded the death penalty against 51 of the 54 accused, 22 of whom are fugitives and are being tried in absentia,” AFP reported on January 29.

“The charge sheet ranged from ‘terrorism’ and ‘murder’ to ‘participation in an insurrectional movement’ and ‘the act of a war crime through mutilation,'” the news agency relayed.

American Michael Sharpe and Swedish-Chilean Zaida Catalan were investigating alleged human rights violations in Kasai-Central province on behalf of the U.N. Security Council on March 12, 2017, when they were murdered. U.N. peacekeepers discovered the bodies of Sharpe and Catalan in a shallow grave 16 days after they were executed. Catalan’s corpse was found beheaded.

“According to the official version of events, pro-Kamuina Nsapu militiamen executed the pair on March 12, 2017, the day they went missing,” AFP recalled on January 29.

“During the trial, prosecutors suggested that the militiamen had carried out the murders to take revenge against the United Nations, which the sect accused of failing to prevent attacks against them by the army,” the news agency observed.

Prosecutors at Kananga’s military court on Saturday referred to members of the local Kamuina Nsapu militia, whom the D.R. Congo government has previously blamed for the U.N. staff killings.

AFP reviewed a confidential U.N. Security Council report on July 18, 2017, indicating that the D.R. Congo government could be implicated in the murders of Sharpe and Catalan.

“[A]vailable evidence does not preclude the involvement of different actors, such as pro- or anti-government Kamwina Nsapu factions, other armed groups as well as members of state security services,” the report read. 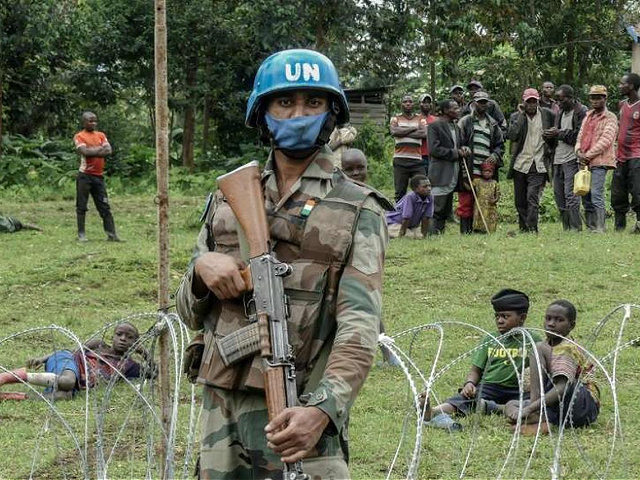 A peacekeeper holds his weapon during a patrol around the new base set up in Rugari, 50 km from the city of Goma, as the population watches the military in eastern Democratic Republic of Congo on January 28, 2022. (Photo by GLODY MURHABAZI/AFP via Getty Images)

The Kamuina Nsapu militia launched an uprising in Kasai-Central province in August 2016 in an act of revenge for the assassination of their clan chief, Jean-Pierre Mpandi, by D.R. Congo state troops. The Kamuina Nsapu targeted “state agents and symbols” during their revolt, according to the U.N. Security Council’s July 2017 report. The D.R. Congo army defended its institutions by launching offensives against the local militia deemed “disproportionate” by the U.N. By 2017, the fighting escalated to involve several armed factions hostile to the D.R. Congo government as well as “pro-government militias,” according to the U.N. Security Council report.

The violence resulted in the deaths of either “hundreds” of people or approximately 3,400 people — depending on reports — before it ended in mid-2017. The U.N. said in 2017 it believed mass graves had been dug in Kasai-Central province to bury the scores of people killed in the conflict. Sharpe and Catalan were investigating the matter at the time of their deaths.

The January 29 verdict of the Kananga military court, which sentenced 51 people to death for the joint killing of Sharpe and Catalan, “is liable to appeal at the High Military Court in Kinshasa,” AFP noted, referring to D.R. Congo’s national capital city.

“Capital punishment is frequently pronounced in murder cases in DRC, but is routinely commuted to life imprisonment since the country declared a moratorium on executions in 2003,” according to the news agency.