The Islamist campaign to eliminate Christians in sub-Saharan Africa is even “more brutal” than similar projects in the Middle East, according to recent reports.

Writing for the National Catholic Register, Nina Shea, director of the Hudson Institute’s Center for Religious Freedom, said this weekend that a “growing number of these African countries are seeing the rise of ISIS- and al-Qaida affiliates, and non-state terrorists like them, who specifically target Christians in their quest to establish Islamist rule.”

These attacks are occurring just as for the first time, Africa has become the continent with the most Christians, numbering 631 million, surpassing even Latin America, Ms. Shea wrote.

The meteoric growth of Christianity in Africa “is imperiled by a fast-growing and violently intolerant Islamist trend,” Shea writes, and yet and “the plight of these persecuted Christians has received far too little attention from the Western governments, NGOs and the media.”

According to a recent Wall Street Journal report, Islamist Fulani raiders are waging a brutal war on Nigeria’s Christians, and yet western media are turning a blind eye to the crisis.

When they do bother reporting on the slaughter of Christians, mainstream media usually describe them as ethnically or economically motivated, wrote Bernard-Henri Lévy, which is patently false, the work of “professional disinformers.”

“They are Islamic extremists of a new stripe,” said a Nigerian NGO director interviewed by Lévy, “more or less linked with Boko Haram.” 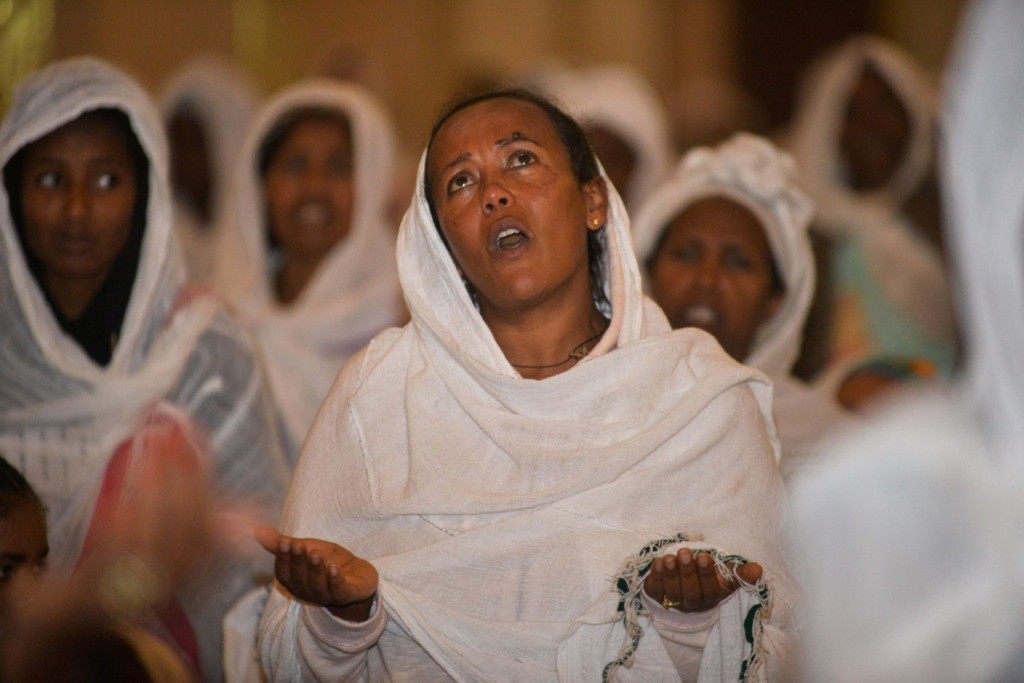 Christian Orthodox faithful pray at the Holy Trinity Church in Addis Ababa, on October 27, 2019, during the memorial service for the victims of the violence which is erupted earlier in the month in the Oromia region and at the outskirts of the capital. (MICHAEL TEWELDE/AFP via Getty Images)

This “slow-motion war” against Nigeria’s Christians is “massive in scale and horrific in brutality,” wrote Lévy, and yet “the world has hardly noticed.”

As Ms. Shea noted in her recent essay, religious hostility against Christians has been most notorious in Nigeria, Africa’s most populous country.

“Over the last decade, more Christians have been deliberately murdered by Islamic extremists in Nigeria’s northern and central belts than in all the Middle East combined,” she observed.

Boko Haram was “notably active” during the past Christmas season, Shea wrote, and the day after Christmas, the group’s ISIS faction released a film showing “black-clad militants beheading 10 blindfolded Christian men and shooting another said to be a Muslim.”

“This message is to the Christians in the world,” the voice-over to the video said. “Those who you see in front of us are Christians, and we will shed their blood as revenge for the two dignified sheikhs,” in reference to Bakr al-Baghdadi and his spokesman.

Nonetheless, in Nigeria’s Middle Belt, “it is the Fulani who are waging a religious cleansing campaign against the Christians,” Shea agrees. “The Fulani are a massive nomadic tribe, spanning parts of several countries, that have an Islamic-extremist component. They typically kill with their machetes and burn churches, along with Christian homes, though, increasingly, they come by motorcycles and vehicles, equipped with AKs.”

In the Middle East, Islamist persecution of Christians has been devastating, resulting in the eradication of some 90 percent of Iraq’s ancient Christian population and up to 50 percent of Syria’s, a situation the U.S. government designated as “genocide.”